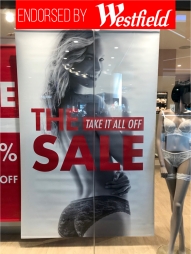 Here’s the text of a complaint lodged by a WAAC member in response to yet another sexist ad appearing in the shop windows of Bras N Things at Westfield Belconnen. When WAAC members raised the issue directly with the Centre Manager, who came down specially to meet us to say (in essence), ‘It’s not illegal, we are a landlord and they are leaseholders [riiiiiight … relevance?], and we’ve already told you our position so please don’t come again’.* Nice job, Breastfield, in supporting sexist advertising that is proven to cause harm to women by turning them into objects, and shown to lead to the early sexualisation of girls. Great corporate citizens, are Westfield. The relevant sections of the AANA Code of Ethics read,

2.2 Advertising or Marketing Communications shall not employ sexual appeal: […] (b) in a manner which is exploitative or degrading of any individual or group of people.

2.4 Advertising or Marketing Communications shall treat sex, sexuality and nudity with sensitivity to the relevant audience.

The AANA Practice Note to the Code of Ethics provides some definitions:

Exploitative means (a) taking advantage of the sexual appeal of a person, or group of people, by depicting them as objects or commodities; or (b) focussing on their body parts where this bears no direct relevance to the product or service being advertised.

Degrading means lowering in character or quality a person or group of persons.

Here’s the member’s complaint. We’ll let you know the outcome in a future post.

“I register this complaint under sections 2.2 and 2.4 of the AANA Code of Ethics.

This advertisement degrades women as a group by telling females to “Take it all off” — a clear double entendre that isn’t even accurate in terms of the 50% sale it is advertising. The inaccuracy of the slogan reinforces the intention of the retailer to sexualise women. The advertisement appears in full view of children (the ‘relevant audience’) walking through the mall. The slogan is short enough and simple enough to be read by children and its meaning interpreted by girls who already receive a constant bombardment of advertising messages about how their worth as humans is measured by their sexuality.

This slogan is directed at a general representation of women that exploits women sexually for the sexual aggrandisement of men, and degrades women by reducing them to objects to be consumed. It should be noted that men are not similarly sexually objectified and commodified by such types of advertising slogans.

Presumably, BNT couldn’t run with the more accurate ‘Take it half off’ — it was a 50% sale — because it would be rather too close to the common ‘Take your top off’ mantra recited by packs of young males at events such as schoolies week. The message is clearly sexual in nature and exists within the context of a rape culture in which young women are accosted by males who shout at these women things such as, ‘take your top off’, ‘get your tits out’, and ‘get it off’. If you’re not sure what rape culture is, or don’t believe it exists, then I invite you to watch https://www.youtube.com/watch?time_continue=18&v=H2c5exzRyhE. I would then invite you to explore some of the extensive literature on how the sexualisation of women by advertisers and marketers contributes to the legitimation of male violence towards women and girls. A sample of this academic, evidence-based literature can be found at https://docs.google.com/spreadsheets/d/1fycmHsggCw2_O7LwZaB53YYJKSFN664Tv1l25XtGVUI/edit?usp=sharing. If the Community Panel considers that the sexual appeal is only ‘mild’ — even if you consider there to be any sexual appeal at all — then the above reading list will show that ‘mild’, individual instances of sexually objectifying advertising of women all add up to the dehumanisation of women as a social class.

Please note that I am not making a complaint about nudity, how relaxed or in control of her situation the model might appear, the fact that the retailer has a right to advertise what they sell, taste, offence, choice, individualism, the personal history or consciousness of the model, the empty concept of ‘empowerment’ as it is used in relation to women’s choices. Of course there is nothing inherently degrading about a woman in underwear — but a sexualised woman being told and/or telling others to take all that underwear off

degrades and exploits all women.”

Ad Standards, Westfield, and BNT, you’ve all been WAAC’d.

*Don’t worry, we won’t: WAAC members are currently having fun exploring all the non-mall alternatives to shopping locally 🙂

Information presented on this website is not a substitute for the advice of a licensed medical professional or mental health provider, nor for the counsel of a licensed solicitor. Users of this website accept the sole responsibility to conduct their own due diligence on information presented and to consult licensed medical, legal, and other professionals for their individual concerns. WAAC makes no warranties or representations on the information presented, and users of this website acknowledge that WAAC is not responsible nor liable, whether directly or indirectly, for any damages or loss caused or alleged to be caused by or in connection with use or reliance on any information, content, products, or services available on or through this site. WAAC is not responsible for the content of any websites that are accessible from this site.